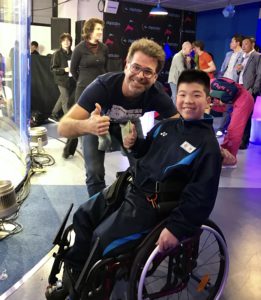 Ok, as you know my physical situation (MS) make it not easy for me to travel. Certainly not to the other side of the world.  My brother-in-law went to the grand opening of the new Flystation windtunnel in Tokyo, Japan. It was his first time over there. He is just back, still jet lagged, because of the 7hours difference and 20hours of travel. He was so surprised about the quietness and cleanness in the city. I knew that already because my brother, Maxime, lived in Japan and told me only good things about this country.

As he is a real sushi lover, he had the best sushi he ever eaten …. hmmm normal it’s the sushi country hihi.

The tunnel is located just outside the city, next to the biggest shopping mall in Tokyo, the area is more residential.

He went to the tunnel with the monorail and metro and once by cab, the cab’s are expensive from the city to the tunnel he paid around £ 15.000, it’s about €130.

The building is really nice, as he has his own tunnel and built it, he knows everything about it and he told me that the building is big and really nice with lounge, changing rooms, 2 floors, …Disco style.  The airflow is smooth and you have a BASE-jump door!

They are still in test phase so everywhere still things that need to be finished, but he told me that’s normal. It’s just such a massive project to build.  The owners are really kind and professional. He told me it’s funny to see all Japanese instructors.

For the Grand Opening and press release some world best flyers where there :  Martin Kristensen, Domitille Kiger from the JoyRiders and Leonid Volkov showed his New show “universal of flying!  I like watching them fly. It gives me such good vibe. It seems so easy watching them fly and do all those awesome moves, but it’s not, they have to train a lot…

This tunnel is a little bit taller than the most one in Europe but definitely the most unique design with an extra floor in glass around the tunnel.

During the press release some other peoples flew like: kids, people in a wheelchair, the daughter of tunnel did a beautiful show and some disabled peoples like me…

So I wish FLYSTATION Japan congratulations with the new tunnel and wish them a lot of success and a lot of flights! At least I probably am the first European girl who has an unique Flystation Japan T-Shirt! 💪🏼 Thank you for that !:-) 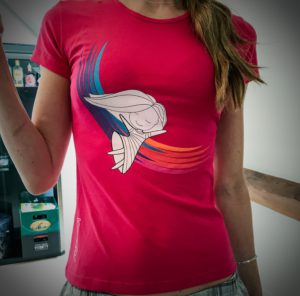 Time of my life

Flying in another windtunnel